Hunt and Slay Your "Bucket List" Boar in 3 Days or Less - Guaranteed!

Spring Break up in the North Country is one of the most thrilling times of the year for hunting a Genuine Boar. This is the Spring Breeding Season, caution is advise when getting between a Demanding Sow and an overly Aggressive Boar can lead to one of the most intense situations a hunter can find oneself in… This can also make for one of the Best Birthdays a Hunter could ask for.

For Steve’s 50th Birthday, he wished for the Boar Bacon. The only way he knew how to get this was to come to Bear Mountain and hunt a Raging Boar during the intense Spring Season.

Steve contacted Bear Mountain Lodge as soon as he knew he was free from work and lined up a special “Birthday Hunt” for him and his good friend David Champion, better known as Champ. After working hard for out of the Country for nearly a year, he deserved a special Birthday Bonus.

His Custom Package included an Alpha Boar for everyone hunting along with a special present for the Birthday Boy,  a “Party Pig.” After picking up Steve and Champ from the airport, they got settled in at the Lodge and began discussing the Party Plans. The Birthday Boy was soon to get his wish.

Since this was Steve’s third trip up to Bear Mountain, he decided to let Champ peruse the Party Pig, as this would prepare him for the Big, the Bad, the Alpha Beast. As you can see below, Champ held the line, and we sang Happy Birthday that night around the grill – no candles needed. Champ and Steve stomped around the Beast’s Lair, making it their Hunting Grounds, in search of the Biggest Boars possible. And as if the Beast knew it was Steve’s Birthday, the Biggest Baddest Boar moved up high in the evening, chasing sows and battling with other Boars. Being in the middle of this primordial behavior  made the Birthday Boy’s Hunt even more of a Blast.

The next morning, Champ heard the rustle of leaves sticking out from under the wet, melting snow. He looked up and was eye to eye with an Aggressive Alpha. In the light of the new day, the beast was coming off the high ground, heading to the thick cool timbers below.

It took three well placed shots from the 45-70 to anchor the Beast to the ground. The big head with his Sharp Sabers, massive shoulders, and mohawk hump, describe his Boar. That Beast to took 975 grains of lead and copper to bring him to the ground. Yes, with that kind of lethal force,  you know with out a doubt, you’ve got a Super Sized Boar. That evening, Steve and Champ dined over Grilled Boar Back Strap, stuffed with garlic and rubbed down with a Bourbon dry rub. Steve got more than what he wished for, and for that, we raised our glasses high as we toasted to Steve’s 50th Birthday.

Steve started his Boar hunting in a high ridge searching for any fresh beds. With no leaves on the trees yet, visibility was ideal. Perched up high, Steve could see down deep into the recess of the Cedar Forest.

The Spring brought in a taste of warm weather which produced fresh chutes of grass in the rich black soil. Glassing into these fresh growth areas, it was possible to find Steve’s Birthday Boar. As we worked the ridge stopping from time to time to search, Steve heard a grunt and snort, the Boar saying, “Happy Birthday, Steve…” Just over the cliff face were four Alpha Boars. This was the biggest wish Steve was hoping for.

Feeding in the open, there was one Boar that certainly is a step up from the rest of the Herd.  With a superb coat and cutters he stood out over all of  the other Boars. Steve made the decision that he wanted this Boar for his Birthday. Needing cover Steve crept silently across the wet leaves and twigs to an over hanging point on the slate ledge. The wind was in his face, and the Boars were a mere 40 yards down in front.

Steve settled in with his 45-70 and waited for Boar to provide the perfect broad side shot. Rooting the topsoil the Boar turned and presented himself. The Boar stayed broadside for some time, and nothing happened.

What was  Steve was waiting for? Did he want  it to pop out of his Birthday Cake? At the thunder of the rifle, the Beast slammed to the ground.  After one kick and a quarter spin in the rich topsoil, the Boar was finished. One Shot – One Kill. Steve could not have made any better of a shot on the Beast. He took out both shoulders, and as there was no exit hole, the Boar took the full brunt of energy from the 325 grain Hornady Revolution bullet.

Steve could not have had a better Birthday, period.  After the Hero pictures and recovery the Birthday Boys enjoyed a pleasant sunny day on the patio. The hams from the “Party Pig” were on the smoker and slowly cooking to perfection.

Pulling out a couple of Lake Trout fillets from Lake Superior, everything was ready for a Birthday Feast. Boar Hunting at Bear Mountain Lodge runs all year long. At the time of this writing Spring Hunts are prime and May will certainly be a great month for hunting your Boar of a lifetime.

Typically  the leaf out is around Memorial Day and the Boars are still chasing down any girls that aren’t  as yet bred, and there is more – the lean red meat is sweetened by the fresh growth of grasses and the minerals in the rich black soil.

Birthday Hunts are available all year long.  One of the great things about  Boar hunting at Bear Mountain Lodge is that any day you hunt doesn’t count against your life. I think Steve has had three 50th Birthday party’s by now! If you would like to host a special Birthday Party for you or someone you know, contact me directly.

Are you ready for your Hunt Rates & Options?

Hello my name is Greg Johnson, my friends call me the Moose Man. I would like to invite you to discover and investigate the website. Go ahead and click on the links above and you can get a copy of the Rates and Options and a current Special Package for Boar Hunting. 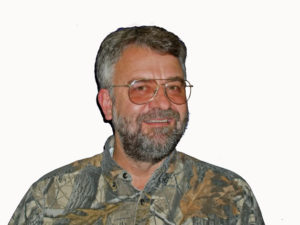 My Name is Greg Johnson and my friends call me the "Moose Man". I was an engineer in a previous life and had the greatest opportunity to Design & Build North America's Premier Boar Hunting Adventure at Bear Mountain Lodge. You can hunt genuine Boar without leaving the safety and Read more...

How the Moose Man Got His Name

A quick story on How the Moose Man got his Name All Materials, Media and Content are Copy Righted and Protected by United States Copy Law.

Any Day You Hunt Bear Mountain Does Not Count Against Your Life!